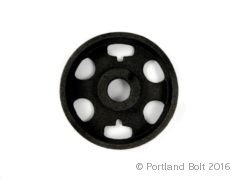 Available in 3 sizes, shear plates are round, malleable iron discs that are designed to sit flush in precut grooves. Primarily intended for wood-to-steel connections, they can also be used in wood-to-wood connections. They allow for greater load-carrying capacity in shear than can be achieved by a bolt alone. Shear plates effectively increase the strength of joints in timber construction and reduce the number of bolts required. 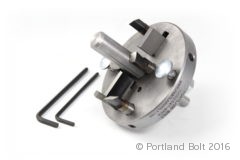 The dapping tool for shear plates creates special grooves (aka daps) in timber and are required for proper installation of shear plates. Dapping tools can be used with either a drill press or a heavy duty ¾” drill.

View this video to see a dapping tool cutting grooves in timbers for the shear plates to be inserted into. 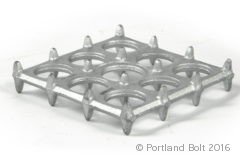 Spike grid timber connectors are engineered to enhance joint strength and rigidity while at the same time simplifying assembly procedures. Timber structures in which spike grid connectors are utilized include decks, pole frame buildings, pilings, wharves, and bridges or trestles. They are also used to advantage in the construction of pole-supported “building platforms” for conventional building of homes, resort buildings and other structures situated on hillsides as well as over or near water. Flat spike grids are used between sawn timbers, while single curved spike grids are used between round piles or poles and sawn members. Spike grids are manufactured from malleable iron in accordance with ASTM A47 grade 32510.

Dan Karpan, Sales Representative at Portland Bolt, is an expert on split ring connectors. Contact Dan by phone, through our form, by email, or via chat if you have any questions.

This website is owned and operated by Portland Bolt and Manufacturing Company. The intent of this site is to provide engineers, architects, contractors, erectors, laminators, fabricators, and fastener distributors with in-depth, technical information pertaining to split ring timber connectors. Please contact us if you have questions, require additional information, need a price quote, or would like to place an order. For more information regarding Portland Bolt's manufacturing capabilities and full product line, visit www.portlandbolt.com.